Manga: Full Clearing Another World under a Goddess with Zero Believers Volume 2

When Does Full Clearing Another World under a Goddess with Zero Believers Volume 2 Come Out? 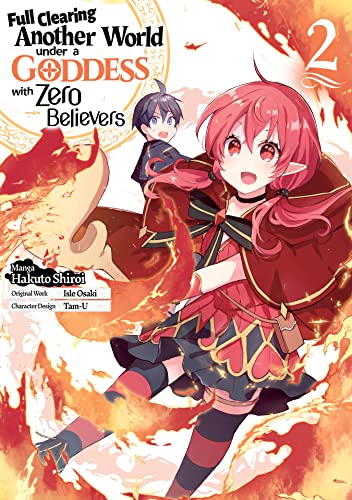 Apprentice water mage Makoto Takatsuki partners with Lucy, an overpowered yet clumsy fire mage. When a griffin attacks, their fledgling party is put to the test—will the combined power of fire and water magic be enough to knock it from the sky?

After being summoned to another world with his classmates, Makoto Takatsuki starts a new game and a life of adventure. But as an apprentice mage with weak skills, he’s playing on hard mode! At the start of his journey, he becomes the sole believer of Noah, a cute goddess who’s actually a wicked deity. She’s trapped in an ultra-difficult dungeon, and Makoto has vowed to clear it and rescue her.

But first, he has to become stronger. In between bouts of intense training, he befriends the elven fire mage, Lucy. Her magic is overpowered, but she’s unfortunately a bit butterfingered when aiming. Together, they tackle all sorts of quests―including one that brings them face-to-face with a fearsome griffin! During this harrowing fight, Noah commands Makoto to escape and leave his new party member behind, but…

“Goddess, I won’t abandon my partner.”

Will the eccentric fighting style of our cheatless hero allow him to grasp victory from the beak of defeat?